The scales are falling from our eyes

We used to be afraid of cooking fish, but that’s changing,
says Lucinda O’Sullivan.
Original article published in the Irish Independent on 17/08/2014.

The Rogersons are another of the great Dublin fish families. They have been based in Dun Laoghaire and Monkstown Farm for many years. The third generation, in the shape of Graham Rogerson, has just opened a really cool new fish shop in Monkstown Village, Co. Dublin.

Along with great fish, Graham has captured, in his new shop, a really chic nautical feel with a French blue ceiling and lobster crates and various marine artefacts displayed at a raised level. I know we are there to buy the fish but it is really nice to be in pleasant surrounds as well rather than, as in many fish shops, just slabs of wet fish and glossy eyes.
Graham told me that his grandfather, James Rogerson, originally from Fleetwood in Lancashire, was the founder of the business. “He and his three brothers had their own fishing boats and used to fish the Irish Sea. When it was rough, they would come into Dun Laoghaire for shelter and stay a couple of days, a lot of fishing boats did that sort of thing. At the same time, my granny, Ellen Shorthall, used to sell fish on the pier and they got to know one another and the rest is history. He moved over here, his brothers stayed in Fleetwood.

“When he moved over here he worked on a minesweeper vessel during World War II. He couldn’t seem to get a job here as a fisherman, he felt at the time that this was because he was English and there was a bit of resentment. He then bought his own boat and used to go ‘hobbling’.”
‘Hobbling’, Graham explained, was where if a boat came into Dublin Bay and the crew didn’t know their way around the rocks, ‘hobblers’ would race out from Dun Laoghaire and Ringsend and the first person out who succeeded in getting their rope on board the boat would get the job to guide them in.

Graham’s dad, George, and his brother, Graham’s uncle Tommy, used to sell fish from the time they were about 11 years old on the Coal Quay in Dun Laoghaire in the 1970s. They also got sent over to Fleetwood to the family there during the summer to work on the boats. “However, when Dad was on the pier one day a fellow from Irish Lights came down and asked him if he would like a job with them, so he was actually then working on the Kish Lighthouse. He then met my mother, Lee, and they decided to open a fish shop in Monkstown Farm, which they did in 1979.” They went straight into the wholesale fish business and it grew to become one of Dublin’s top fish wholesale suppliers called Ocean Marine providing fresh and frozen seafood to restaurants, hotels and bars.

The sea was definitely in the Rogerson family. Graham’s eldest brother David became the youngest skipper in Ireland at just 16 years of age, in Greencastle. He is now selling yachts in Greece. His other brother, Darren, is a great swimmer and was in the RNLI; he runs the wholesale fish business Ocean Marine. Graham laughed as he told me, “I was originally working in IT with the Bank of Ireland but, in 2009, my sister, Lisa, and I re-opened the new Georges Fish Shop in Monkstown Farm.” It seems the draw of the sea is still there. 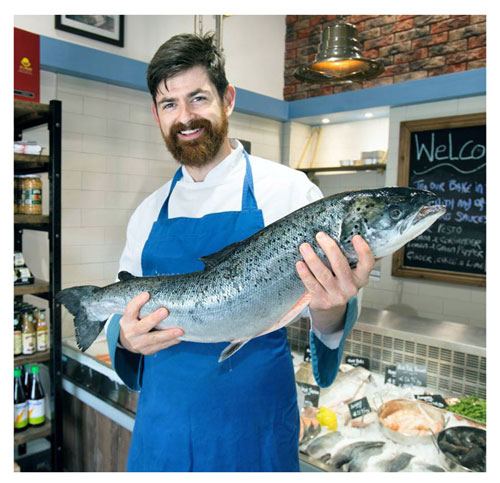 They have a wonderful array of fish and deli products including Toonsbridge mozzarella cheese, Silver Darlings, Kerry walnut salami, chorizo, Boquerones and their own signature ‘Georges’ chowder and fish pies plus delicious fish cakes. To what does he attribute the increase in the popularity of fish? “People are much more health conscious nowadays and eating more fish. In the old days people weren’t getting fish as fresh as it is now. Boats weren’t as modern back then, the fish wasn’t kept as well, there wasn’t as much ice, it probably ran out at sea. In the 1940s a lot of boats went out with no ice at all and they would come back that day or a couple of days later. Even the shops wouldn’t have had refrigeration as good as it is today. We have our factory in Monkstown Farm and we do all our processing there.” Monkstown is also now a real foodie village as there are so many restaurants. Graham says hake is a very big seller, with organic salmon being also very popular.

“At weekends, people will go for things like John Dory and shellfish. An Italian friend of mine is sourcing top-notch charcuterie in Italy and soon this will also be available in the shop.”